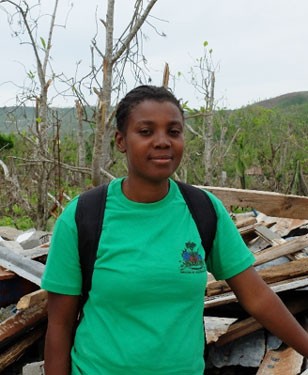 Joanne Moïse, 28, is a member of the women’s peasant organization OFTAG, which is supported by Development and Peace. As a member of OFTAG, Joanne received training to be a women leader in emergency situations. It did not take long before she had to put that training into practice when Hurricane Matthew, one of the worst storms in Haiti’s history, threatened the Department of Grand’Anse, where she lives. She was called by the Protection Civile to help plan an evacuation of her community.

“They showed me photos on their phones of the damage caused by the hurricane in neighbouring Les Cayes. I was in shock. I couldn’t understand what I was seeing,” recalls this mother of two.

She took part in a phone chain to help warn people and thanks to these efforts the majority of her community survived the 230km/hr winds and torrential rains. What could not be saved, however, were people’s houses and their crops.

The storm was a life-changing moment for Joanne and her family. Having lost nearly everything, they must now rebuild from scratch but being part of OFTAG is a source of strength. “After God, it is OFTAG that gives me hope. We encourage and talk to each other. I hope that Canadians will continue to show their solidarity and support.”

“We took shelter in a church, but then it crumbled. We hid under the pulpit and then made our way to a local school. We saw houses being blown away and there were branches falling everywhere. We took shelter in a school and have been living there ever since.”

She said that in the aftermath of the storm, they had to eat dead animals and drink coconut water because everything was taken away. “I am worried for our health because there is no potable water.”

You can help women peasants like Joanne by
giving today!