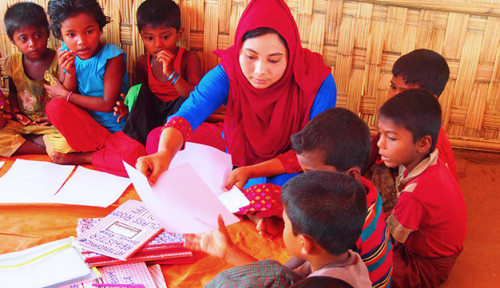 On September 20, 2018, the House of Commons unanimously adopted a motion to recognize the treatment of the Rohingya, a Muslim minority of Burma (also known as Myanmar) as a genocide. “We were pleased to learn that Canadian MPs have spoken with one voice to denounce the increasing and repeated atrocities committed against the Rohingya since the country’s independence. Development and Peace has repeatedly called for an independent international inquiry into allegations of crimes against humanity targeting the Rohingya and other ethnic minorities in Burma in order to end impunity and recognize their suffering,” said Serge Langlois, Executive Director of Development and Peace – Caritas Canada.

This resolution supports the report of the United Nations fact-finding mission, which establishes that Myanmar’s top generals, including the Commander-in-Chief, must face prosecution for genocide against the Rohingya. On the heels of this report, the Prosecutor of the International Criminal Court launched a preliminary examination, which is the initial step in a process that can lead to a full investigation and eventually prosecution.

Since August 2017, more than 700,000 Rohingya have fled violence perpetrated by the Burmese military and Buddhist militias to crowded makeshift camps in neighbouring Bangladesh, joining thousands of forced migrants who arrived in earlier waves. They left behind 600,000 Rohingya, still living in Burma in conditions of extreme vulnerability. “There are 68.5 million refugees, asylum seekers, and internally displaced people in the world today, i.e. almost twice the population of Canada. Without inclusive and participatory democracies that respect human rights, forced migration will only increase,” Mr. Langlois added.

Since the start of the crisis, Development and Peace and their partner Caritas Bangladesh have supported almost 100,000 Rohingya refugees by providing food and other essentials, shelters, drinking water supply points, sanitary facilities, and showers that are safe to use for women and girls, and by raising awareness among women and girls about issues surrounding protection.

One year after the massive flight of the Rohingya, current conditions in Burma do not allow for a safe and dignified return of Rohingya refugees. In response, Development and Peace – Caritas Canada is calling on the Government of Canada to:

Contribute to an inclusive peace and reconciliation process which addresses the root causes of the forced displacement of Rohingya with the goal of finding a lasting solution to the crisis.

Let’s address the root causes of forced migration by joining the Share the Journey campaign!