Hope for refugees as Gambia sues Myanmar for genocide? 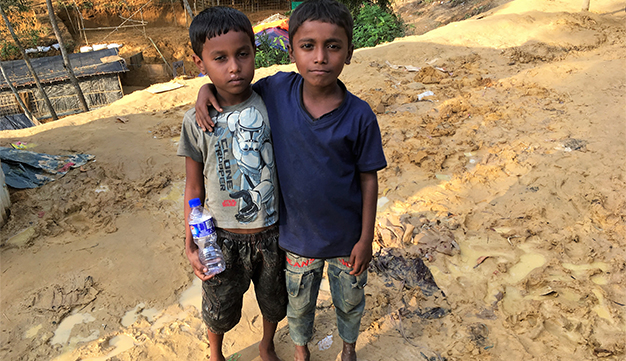 Development and Peace — Caritas Canada welcomes the Government of Canada’s ongoing commitment to have the persecution of the Rohingya people recognized as genocide, most recently evident in its response to the Republic of Gambia’s initiation of proceedings against Burma (also called Myanmar) for genocide at the International Court of Justice (ICJ).

Reacting to a government statement on this move, Development and Peace’s humanitarian assistance programs officer, Dominique Godbout, said, “We appreciate that Canada has committed to exploring options for supporting the Gambia and addressing the root causes of the Rohingya crisis. It us up to us as engaged citizens to ensure this happens.” Godbout hopes “the ICJ case will end the impunity with which the Rohingya have been persecuted and denied their fundamental right to statehood.” She noted that the International Criminal Court, too, has authorized an investigation into the Burmese situation.

Last year, Parliament had voted unanimously to condemn the Burmese armed forces’ treatment of the Rohingya minority as genocide, making Canada the world’s first country to formally adopt this position. That motion had followed the release of damning reports by a United Nations fact-finding mission and by Canada’s own special envoy to Burma, Bob Rae. Since then, Canada has led the international community in calling for accountability and action on the Rohingya crisis.

According to some estimates, nearly a million Rohingya people have been forced to flee terrible violence in their homeland in Burma’s Rakhine State and live in extremely difficult circumstances in refugee camps in neighbouring Bangladesh. One of these, the Kutupalong-Balukhali camp in the Cox’s Bazar district, houses some 900,000 Rohingyas and is the largest refugee camp in the world.

During a recent field visit to the area, Godbout had found the refugees lacking access to safe water, healthcare, sanitation and shelter and facing significant risks of human trafficking, violence and disease. Over the past two years, their presence had begun straining the capacities and forbearance of the already vulnerable host communities. With the support of Global Affairs Canada and in partnership with Caritas Bangladesh, Development and Peace therefore helps address the needs of both the Rohingya and Bangladeshi communities.

Right at the outset of the crisis in 2017, our partners met the refugees’ immediate needs by providing mosquito nets, solar lamps, umbrellas, weatherproof shelters and modern smoke-free cooking stoves. Since then, Rohingya day labourers have helped improve their own living conditions by building wells, latrines, bridges and drainage canals and installing solar streetlamps. Our partners are also helping augment host communities’ incomes through cash-for-work initiatives, agricultural training and small business development. In tandem, these measures are fostering solidarity between the refugee and host communities.

While conducting this work, Development and Peace has asked the Government of Canada to address the root causes of the Rohingya crisis(see our 2018 report on the crisis). We persist in urging the government to promote peacebuilding in Burma and to continue supporting the refugees and host communities in Bangladesh.

With complex international cases at the ICJ taking years to resolve, the Gambia’s lawsuit is unlikely to bring immediate redress to the long-suffering Rohingya refugees or their overburdened Bangladeshi host communities. To bring them a measure of dignity and to empower them to seek justice, Development and Peace will therefore have to continue relying on your generosity.