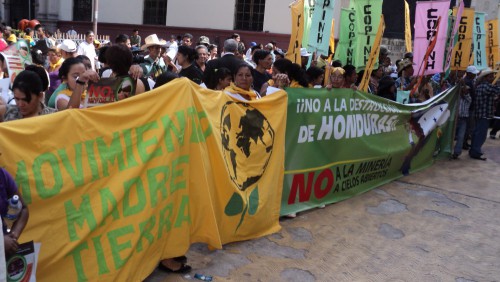 Development and Peace is shocked by the murder of Carlos Mejia Orellana, head of marketing at the Jesuit-run Radio Progreso, on Honduras’ north coast, and deplores the dramatic deterioration of the human rights situation in Honduras since the coup d’état in 2009.

Radio Progreso is known for its frank and critical social analysis. The radio has provided in depth coverage of the serious impact on human rights of the coup d’état, which deposed a democratically elected government. It is a member of Development and Peace’s partner ALER, a resource for community radios in Latin America.

ALER director Dulce Garcia said that the network of community radios of Latin America are standing in solidarity with Radio Progreso, and called on the Honduran government to ensure those responsible for the murder are brought to justice.

“This murder is a direct blow, not only against the life of our companion and to his family, but it is also an attack on the work that we carry out at Radio Progreso,” said Jesuit Father Ismael Moreno, director of the radio, in a statement.

With 79 people murdered per 100,000 of the population in 2013, Honduras now has the highest murder rate in the world for a country that is not involved in an armed conflict. Much of this violence is directed at those trying to bring information to the population and restore human rights. Since the coup d’état, 32 journalists have been murdered and human rights defenders deal with frequent threats. As a worker at a progressive radio, Carlos Mejia had received multiple threats. The Inter-American Human Rights Commission urged the Honduran government to enact precautionary measures for the radio worker on three occasions – in 2009, 2010 and 2011. However, Father Moreno said in a statement that the recommendations of the Commission had been ignored.

In light of the flagrant and persistent violations of human rights in the country, and the prevailing impunity for perpetrators, Development and Peace reiterates its concerns over Canada’s free trade agreement with Honduras. Canada and Honduras concluded negotiations for the free trade accord in 2011, two years after the coup d’état and in the midst of a widely recognized human rights crisis.

“Canada should be pressing the Honduran government to take effective action to protect human rights rather than promoting free trade in such a context,” says Michael Casey, Executive Director of Development and Peace.

Development and Peace’s Honduran partner CEHPRODEC has also expressed serious concerns about the Canada-Honduras free trade accord and how it will increase Canadian mining operations in the country. In 2012, Pedro Landa, of CEHPRODEC, addressed parliamentary committees on how the Canadian mining projects could threaten the environment, and the rights of communities who oppose such projects.

Development and Peace urges Canada to stress to the Honduran authorities the importance of resolving the murder of Carlos Mejia, and battling the impunity that prevails in the country, and to place human rights before trade.