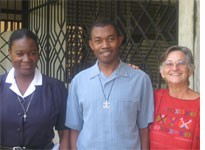 Solidarity with Haiti's religious communities means help for many

Haiti's religious communities play an important role in the country, especially in caring for the educational and health care needs of Haitians. In the aftermath of the January 12th 2011 earthquake, even as religious communities faced their own losses and difficulties, they were immediately ready to get back to work to help those in need and Development and Peace wanted to stand in solidarity with them in their efforts.

As part of its reconstruction program for Haiti, Development and Peace has contributed close to $500,000 to various religious communities in Port-au-Prince to help them resume their work and keep providing services to those who need them most.

The January 12th 2011 earthquake in Haiti not only shook the physical foundations of the country, but it also shook the core of the nation’s people, leaving many traumatized, anxious and reluctant to be within the confines of buildings.

But how to deal with an effect that is not physically visible yet has the potential to paralyze a people? Many of Haiti’s social services, such as education and health care, are looked after by religious communities, so it is not surprising that the Haitian Religious Conference quickly mobilized to look at how to respond to the trauma of the population.

It developed a unique program to help provide psychological and psycho-social support to those affected, particularly youth. The program is headed by Father Michel Eugène and Sister Marie-Pierre Saint-Amour of the Holy Cross Congregation. Both have done university studies in psychology and could recognize that the minds and spirits of people needed to be tended to.

"After the earthquake, we had hundreds of people that came to live on our property," says Sister Saint-Pierre. "I noticed that the children were very isolated and very afraid. They were having nightmares and describing the devil in their dreams."

She decided to bring the children together one day and get them to draw and dance to help unleash some of their anxieties.  Beginning to see the children smile again inspired Sister Marie-Pierre and Father Michel to put together a more formal program.

They brought in the added expertise of Sister Mathildé, who has a background in art therapy, to design relaxation and other activities to help youth de-stress and come to terms with what they lived through.

"We can’t heal their wounds, but we can help them live with their experience, lighten the load on their shoulders," explains Sister Mathildé.

For 16-year-old Emmanuelle Saint-Cheny her experience of the earthquake included losing her grandfather in the disaster. "My grandfather was very dear to me. I don’t have a father, so he was like a father to me. When he died, I didn’t want to live anymore,” she said. “With this program, I was able to see the reason to live again. I didn’t forget my grandfather, but I came to peace with his death. I understood that God gives life and he takes life."

Emmanuelle’s relief is also being felt by up to 16,000 children in the community. University students studying in social work and education are being trained to work with youth in schools. And even the training is having its own benefits for those involved, just ask Magalie Charles, an education student at Université Quisqueya.

"Not that long ago, I could never have stayed under a roof this long," she remarks, "It’s really remarkable."

Listen to a participant talk about how this program helped her heal: