Getting youth involved in the reconstruction of Haiti 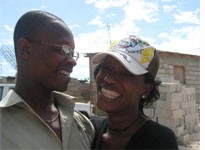 JACHA, a youth organization in Jacmel, has long been working to improve the future of Haiti by looking after two of the country's best resources: its youth and the environment.

The organization brings the two together by teaching youth about the importance of the country’s environment and by actively engaging them in preservation activities, such as tree planting and organizing awareness campaigns in their communities.

Jacmel was not spared by the January 12th earthquake. This cultural capital of Haiti lost many of its heritage buildings and a large portion of the city’s residents are now living in camp sites that dot the landscape of this coastal town.

With the city covered in rubble and people moving into the crowded tent cities, JACHA recognized an urgent need to ensure that these spaces did not quickly fill with rubbish and increase the potential for the spread of disease.

The organization quickly put together a cash-for-work program supported by Development and Peace that mobilized over one hundred youth members of the organization and dispatched them to camps to organize clean-up committees and speak to residents on how to manage waste and keep their surroundings clean.

"Life in the camps is impossible. No one looks after us," says Dayana Alexandre, 21, who lives with five other people in a tent. "At least with the activities from JACHA, I feel better and safer. They are helping me develop," she says.

The importance of this kind of work in the camps became frighteningly evident with the rapid spread of cholera in the country.

As soon as news of the dissemination of the disease broke, JACHA asked its youth members to speak to residents on precautions they can take to prevent the spread of cholera. Although, there have been some cases in Jacmel, the city has mostly been spared from the disease.

In fact, disaster prevention has become a large part of JACHA’s work and when the hurricane season was approaching, members worked diligently in the camps to warn people of what and what not to do to remain safe.

"If people had known what to do in the earthquake, we would not have lost so many people. That is very sad. That is why we wanted to start a prevention program. Why we had to," says Jackson Marcelin, one of the coordinator’s at JACHA.

JACHA, however, is also concerned with giving youth the opportunity to improve their future prospects so they can flourish. They organize a variety of classes for their youth members, who range in ages from 15 to 30.

The courtyard of the organization is always full of young faces chatting and laughing. Some are there for English or computers courses, while others gather for cooking classes. JACHA even organized a papier-mâché workshop for some local kids. It is an art form that Jacmel is renowned for, and despite the city losing some of its heritage in the earthquake, at least other forms are being preserved and appreciated by a new generation of Jacmelians.