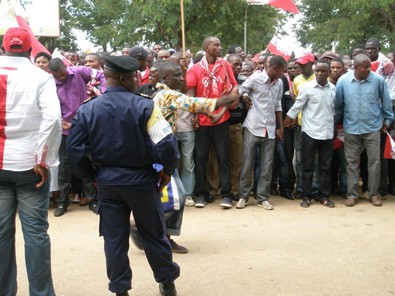 When the Development and Peace delegation landed in Lubumbashi, the atmosphere was charged with excitement over the elections. Hundreds of people filled the airport, waiting for the arrival of presidential candidate Vital Kamerhe, of the Union pour la nation congolaise (UNC). Flags, songs and slogans made for an impressive welcoming committee! 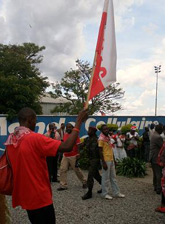 Already at work: reporters from Radio communautaire du Katanga (RCK), a group we support. The journalists were covering our delegation's arrival, as well the candidate’s, who was scheduled to address the population later that day.

As we waited for our luggage, Godi Ngosa, RCK station director in Lubumbashi, briefed us on the situation in Katanga and on the community radio’s work with the population, ahead of the upcoming elections. "We are hoping there will be no violence, but tempers are hot in the region, more so than in 2006."

We were warmly greeted by Bishop Fulgence Muteba, of the Kilwa-Kasanga Diocese, Fidèle Banza Mutombo, Program Consultant for Development and Peace in Katanga, Judith Kisimba, Program Assistant, and Godie Ngosa. Over the next few days, we will have the opportunity to visit RCK’s various stations in Katanga.