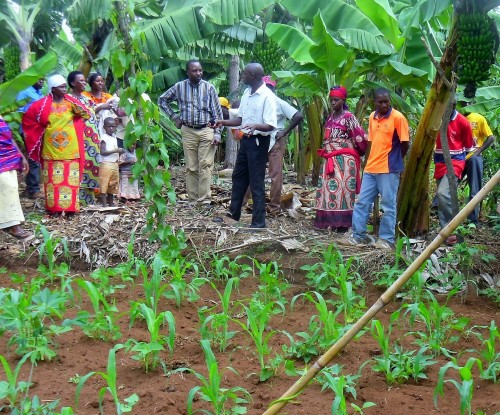 The association ADISCO (Appui au Développement intégral et à la Solidarité sur les Collines), a Development and Peace partner in Burundi, has just been chosen as a recipient of the 2014-2015 King Baudouin African Development Prize for its contribution to improving the incomes and living conditions of thousands of Burundian farmers.

Unfortunately, development initiatives like those of ADISCO are being threatened by a new wave of violence that could engulf the country. The recent announcement by current president Pierre Nkurunziza that he will stand for a third term in elections in June has triggered a tense situation in Burundi.

President Nkurunziza is refusing to abide by the constitution, which provides for a maximum of two terms for a president, and to uphold the spirit of the peace agreements that brought an end to a long and brutal civil war in the country that left tens of thousands dead and created hundreds of thousands of refugees.

Proponents of democracy have held daily protests, and security forces have responded by shooting at demonstrators, closing independent radio stations and blocking access to social media networks. The government is also believed to have encouraged the formation of militias. The present situation has resulted in more than 18 deaths, numerous injuries and some 50,000 refugees fleeing to neighbouring countries.

President Nkurunziza is listening to neither the international community, civil society or the Catholic Church, which are all urging him to uphold the peace agreements. The Burundi Catholic Church spoke out in March against a third presidential term, saying that:

"With respect to the President of the Republic’s terms, which are currently controversial, our wish is that the constitution be read in the spirit of the Arusha agreements. […] as citizens of Burundi and bishops of the Catholic Church, who do not want the country to descend back into civil war, we believe that no president of the Republic should hold more than two terms of five years each.”

It is feared that the current climate gripping Burundi may lead to an escalation of violence and renewed conflict, not only in the country, but also throughout the entire Great Lakes region (Democratic Republic of Congo, Rwanda).

Burundi is a poor country and one whose wounds from the civil are not yet healed. Initiatives such as those by ADISCO are necessary both for development and for peace.

ADISCO works to "mobilize the resources of Burundian farmers to increase their autonomy and help them build viable business models." It supports agriculture and entrepreneurship, promotes the creation of cooperatives and health insurance groups, and works to bring about lasting changes in society.

An approach like ADISCO’s brings tangible results for social transformation and enables a real reduction in poverty in this country. The King Baudouin Prize awarded to ADISCO is a prestigious honour given to individuals or organizations whose "innovative initiatives […] improve quality-of-life and empower local communities to take development into their own hands."

These civil society initiatives, however, risk being completely undermined by the extreme political tensions in Burundi. Development and Peace hopes that the peace agreements and the constitution will be respected so that democratic, non-violent and transparent elections can take place.

Development and Peace wishes for a return to peace as quickly so that initiatives for real development will not be undermined. Without peace, civil society organizations like ADISCO will not be able to continue their critical work to improve the living conditions of the population.

Hassan Ruvakuki, a journalist at Radio Bonesha, is released from prison
Read more