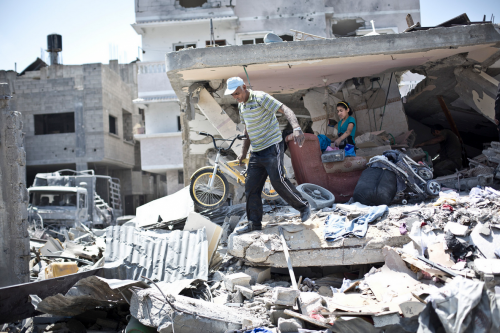 As a three-day ceasefire continues between Israeli Forces and Hamas, there are hopes that this suspension of hostilities will lead to a more durable peace. As part of the truce, both sides will enter into peace talks in Egypt in the coming days.

Despite this glimmer of hope, the needs in Gaza remain very high. After four weeks of violence that caused the deaths of 1,865 Palestinians and 67 Israelis, as reported by the United Nations Office for the Coordination of Humanitarian Affairs, over 520,000 Gazans are returning to homes that may no longer be standing. Electricity and water are limited, as is food and medical supplies to treat the close to 10,000 people who have been injured, including 2,700 children.

Development and Peace is working with Caritas Jerusalem to help cover some of the urgent needs created by this crisis.

Together, they are providing medical supplies and fuel to hospitals, and to Caritas Jerusalem’s health centre and mobile clinic. They have also been distributing blankets, food and hygiene kits to the most vulnerable people, including displaced families, widows with children, families living under the poverty line and those where the main breadwinner can’t work due to injury.

Despite working in a highly stressful and insecure environment, the staff of Caritas Jerusalem is managing to deliver aid and medical services. One of the most critical of these is providing psycho-social services to those in the worst-hit areas, especially children, who are of particular concern due to the trauma of the violence they have witnessed.

“Recently, I met a young boy named Muhammad. He’d lost his home in a bombing raid. I asked him if there were any games he would like. He told me that he’d like a tank, a military aircraft and a policeman who could make sure he got back his home. Muhammad is six years old and all he sees in his world is war and destruction. For Gaza’s children, fear and insecurity are scars that will stay with them for a lifetime. We need to take care of the most vulnerable people. An integral part of what we do as Caritas is comforting people in their time of need,” describes Ameen Sabbagh, the Gaza coordinator for Caritas Jerusalem Gaza.

Ameen has lived in Gaza for the last 13 years and has seen the effects on his own children. “Many of the buildings in front of my house have been bombed. I have two children, aged two and six, and they cry a lot because of the bombings. In spite of what is happening now, I hope that the time will come when they will be able to have a life where there’s peace and love rather than wars and violence,” he says.

Now, with the current ceasefire in place, it still remains unclear how long it will take for people to be able to return to their homes, and this on the condition that there is not a return to hostilities.

Development and Peace will continue to support its partners in the Palestinian Territories, not only in delivering aid, but also in working to establish the conditions for long-term peace, that so many in the region pray for.

Gaza: Call for an immediate end to violence
Read more