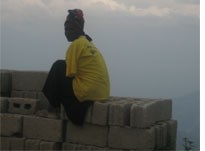 Fritz Ner-Sérénien remembers how he almost saw his wife and daughter die on that fateful day in January when the earthquake struck.

"My wife was doing our daughter’s hair under the gallery when I heard a loud noise. I called to my wife to come out.  They ran out just as a support gave out and the gallery crumbled," he recalls.

Fritz lives in the community of Duval, in the rising hills that peer down over Port-au-Prince. Although Duval is only a few kilometers outside of the capital, it can easily take a few hours along a narrow and winding road to reach the community.

Like Port-au-Prince, Duval was majorly affected by the earthquake, with an estimated 80 percent of homes damaged or destroyed. Thankfully, this mountain enclave received emergency support from Caritas Port-au-Prince, which is a diocesan office of Caritas Haiti, in the aftermath of the quake.

Long-term reconstruction effortsCaritas Haiti has been an important partner of Development and Peace throughout the emergency in Haiti. With nine diocesan offices throughout the country, it had a strong community network in place, which helped with the distribution of relief items. With support from Development and Peace and other Caritas members, water, blankets, tents, food and hygiene kits were distributed, clean drinking water was provided in camps and mobile clinics were organized.

With the extent of damage so widespread in and around Port-au-Prince, however, Caritas Haiti quickly realized that it would need to be there in the long run to help its communities come back together, and Development and Peace is committed to supporting them.

Housing has been one of the most daunting challenges in the reconstruction of Haiti so far, despite its pressing need.

Slow progress and lingering questions prompted Development and Peace and Caritas Haiti to organize the first conference on the reconstruction of houses in the country.

The three-day conference brought together various actors implicated in housing issues, from government officials to representatives of Caritas organizations, which led to informative exchanges, opened dialogue on the best ways to proceed and reinforced the necessity for permanent houses for victims rather than temporary shelters.

Housing, however, is just one facet of the complex reality being faced by communities such as Duval. Most people have used up their savings and communities remain extremely vulnerable to new disasters – issues that are being addressed by Caritas-Port-au-Prince in its reconstruction plans.

Development and Peace is supporting Caritas Port-au-Prince in their long-term plans to help communities like Duval not only re-launch their economic activities and improve their food security, but strengthen them in the long-run.

Duval and seven other surrounding communities will be participating in an integrated project supported by Development and Peace, which will extend over three years and cost $3.5 million.

The project will incorporate several components, such as tool and seed banks, a micro-credit program for women and even an innovative animal chain, where a person in the community is given a goat or a chicken and must return the first-born so that the chain can continue to other members of the community.

Even the simple gift of seeds is a symbol of hope to these victims. "Bad seeds are a crucial problem. Sometimes peppers and tomatoes, they don’t grow because of the poor quality of the seeds. It’s as if the soil doesn’t like these crops," says Tomas Petit-Frère, the local Caritas representative who lives in Duval and will help coordinate the project. "We pray that you can bring us good seeds," he says, his eyes reflecting on what little they have left.