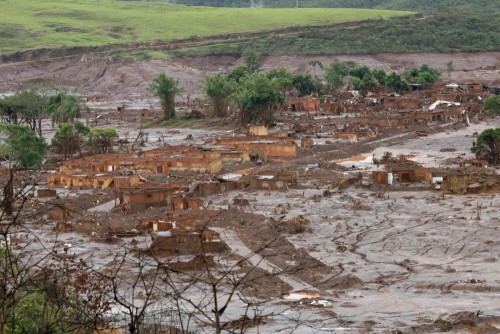 Development and Peace’s partners in Brazil are condemning the negligent actions and lack of accountability of the mining companies involved in a tragic mining catastrophe that is being described as one of the worst environmental disasters in Brazil’s history. They are also demanding that a new mining code protect communities and the environment rather than mining companies, so that future catastrophes like this can be avoided.

The disaster occurred when a talings dam burst at the Samarco iron mine near Mariana in South-eastern Brazil, releasing 55 million cubic metres of mud and mine waste – the equivalent of 25,000 Olympic swimming pools – killing 13 people and leaving 11 missing. The United Nations said in a statement that the residue “contained high levels of toxic heavy metals and other toxic chemicals.”

Images from the scene show houses and cars swept away and covered in grime by the mud and toxic waste that gushed forth over nearby communities.

“The residents, without receiving any notice from the company, began to run when they heard the sound of the dam breaking, hastily fleeing to the hills and higher parts of the district. Several residents reported seeing people being taken by the flood. Homes, schools, electricity, roads, everything has been destroyed,” reported Development and Peace partner the Movement of People Affected by Dams (MAB). The group estimates that in one district where 620 people live, 90% of homes were destroyed. In addition, those who make their livelihoods from fishing and eco-tourism have lost their source of income.

The waste that was held in the tailings pond flowed into the River Doce, one of the main water sources for the area and one of Brazil’s largest hydrographic basins, contaminating the water and killing off marine life. The river feeds into the Atlantic Ocean, whose shoreline waters have begun to turn a cloudy brown from the toxic waste that has seeped in.

The mine is a joint venture owned by Australian mining giant BHP Billiton and Brazilian company Vale, which also has mining interests in Sudbury, Canada.

Development and Peace’s partner Justiça nos Trilhos (Justice on the Rails) has long been advocating against the irresponsible practices of Vale and its disregard of the rights of communities affected by its mining operations.

The rapid mobilization of communities and the outcry from the public has placed pressure on the Brazilian government to demand that the companies compensate affected communities and pay for the extensive clean-up required to rehabilitate the area. It is in the process of suing the companies for $20 billion US in damages.

The companies have stated that they do not know the cause of the collapse, however there is growing evidence that the dam was weakened because it was supporting a volume of water many times that which it was designed to contain. Furthermore, groups like the MAB, are pointing to a study done by an environmental group in 2013 that concluded that there were weaknesses in the dam and recommended that Samarco put in place improved monitoring and create a contingency plan. These steps, however, were never taken and the company was even given permission by the local government to extend the three dams of the mine. Surrounding communities had also complained for years about the insecurity of the dams, and there are fears that the remaining dams could also collapse.

“We're talking about some of the biggest companies in the world. Even with all that profit, these corporations refused to invest the minimum security necessary to prevent a catastrophe of such magnitude,” stated the MAB. “There was not even a siren to warn the hundreds of residents living downhill from the tailings dam”.

The Samarco mine is located in the province of Minas Gerais, which is the mining capital of Brazil. Despite the disaster, the governor of Minas Gerais succeeded in passing a bill (Project of Law No 2946/2015) that encourages more mining in the region and reduces supervision of security measures as well as citizen participation in the environmental impact process.

For the moment, activities at the Samarco mine are suspended. Groups like the MAB and Justiça nos Trilhos will continue to accompany those affected to not only ensure they are compensated, but to keep communities organized in the fight to prevent future tragic disasters and to promote development that does not put profit before people or the environment.

“We have a big task to be in solidarity with the victims of this tragedy, to help organize affected families and empower them in their struggle, to demand that the company face up to its responsibilities and to demand that actions are taken to avoid similar cases,” says the MAB.

The Brazilian congress has been trying to approve a reform to the mining code since 2013, despite widespread criticism and opposition from social movements and civil society organizations. Many Development and Peace partners have been lobbying the government for important changes to the proposed text of the bill, due to clauses that aim to reduce socio-environmental protections, particularly with regard to the use and contamination of fresh water (as many parts of Brazil are experiencing a drinking water crisis). They also denounce how the reforms to the code put mining interests above the wellbeing of the population (for instance, above agricultural interests or the need to protect traditional communities or fragile ecosystems). They are also critical of the way communities affected by mining have been excluded from the reform process.

“If citizens and the environment are to be respected and protected in the future, then they must be heard by legislators, and their concerns and rights need to be taken into consideration in the reform process” says Development and Peace partner MAB.