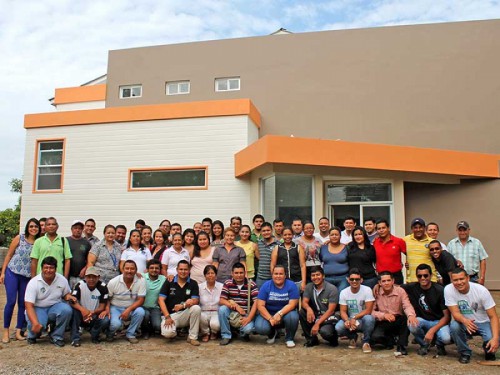 The courageous work of Development and Peace’s Honduran partner Fundación ERIC was recently recognized by the Ignatian Solidarity Network, which presented the organization with its “Legacy of the Martyrs” award.

Fundación ERIC was given the award for its “grassroots radio programming; training on human rights, community organizing and empowerment; the formation of leadership committed to social change; and aiding migrant families.”

The award was created in memory of the 25th anniversary of the murder of six Jesuit priests in El Salvador by the Salvadoran Army. This brutal and premeditated assassination marked a turning point in the war in El Salvador by bringing international attention to the crisis.

Fundación ERIC (Equipo de Reflexión, Investigación y Comunicación), which recently merged with Jesuit-sponsored Radio Progreso, has been documenting the impact of government policies on the poor and investigating human rights abuses in Honduras. Development and Peace is supporting their work in Lower Aguan, a region characterized by conflict and that has one of the highest murder rates in the country.

The Aguan is a region of fertile arable land in Honduras, but the land is concentrated in the hands of a few landowners. Many claim the land was acquired illegally in the 1990s, and peasant movements have been struggling for agrarian reform, and the right to own land. It has led to the violent repression and criminalization of these movements, whose leaders are often targeted for execution. The conflict there has worsened since the 2009  coup d’etat.  The real issues behind the crisis situation in the Lower Aguan is little known by the Honduran population and is the subject of misinformation campaigns by private media with vested interests in the region.

Fundación ERIC is seeking to expose the inequitable distribution of land and the human rights violations occurring in the Lower Aguan through radio broadcasts, investigations and by providing training to radio correspondents and peasant leaders to strengthen coverage of the issues affecting the region, and encourage the participation of the local population in radio broadcasts.

This work, however, does not come without its own risks. Fr. Ismael Moreno Coto, S.J., director of Fundación ERIC, has been threatened several times for challenging speaking out against the government policies and for his human rights work. Fr. Moreno recently testified before the U.S. Congress at the Tom Lantos Human Rights Commission on the human rights situation in Honduras and the fear that he, his staff, and other journalists experience there.

Fr. Moreno was present at the ceremony in Washington D.C. to accept the award from the Ignatian Solidarity Network on behalf of Fundación ERIC.