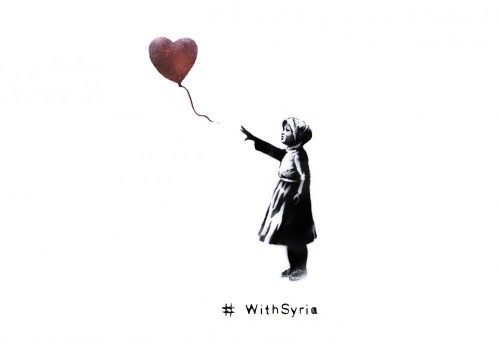 As the conflict in Syria enters into its fifth year and violence within the country continues to worsen, Development and Peace has joined the #withSyria movement, an international coalition of over 130 organizations calling for an end to violence that affects civilians, an inclusive and negotiated political solution to the conflict, as well as an increase in humanitarian aid for those affected by the war.

The call of #withSyria for urgent action is closely in line with the hopes of our partners in Syria for a peace process supported by the international community.

“JRS urges those powerful actors within the international community to set aside national interests for the common good, pushing for the cessation of violence against civilians and humanitarian workers by all parties and paving the way for serious political dialogue. The concerted effort of the international community would generate the political will to find a negotiated solution to the conflict,” wrote Fr. Nawras Sammour, Director of Jesuit Refugee Service in Syria, in a statement to mark the fourth anniversary of the start of the war in Syria.

The call for an inclusive and negotiated peace process is of particular significance for Canada, which recently announced that it is launching air strikes in Syria.

The coalition is also asking for an increase in humanitarian aid to help civilians who are seeing their lives destroyed by this endless conflict. At the last conference of international donors, held in Kuwait on March 31st, the United Nations received commitments for only half of the necessary funds required to help the millions of refugees, displaced persons and other civilians affected by this conflict. It is a worrisome sign, particularly as there seems to be no end in sight to this conflict, or peace on the horizon.

While recognizing the unprecedented pressure this crisis is placing on international humanitarian aid, Fr. Sammour implored international actors to reconsider their practices by further supporting initiatives being launched by local civil society groups still present in Syria so that long-term and sustainable solutions to this conflict can be brought forward:

"International donors ought to support the humanitarian response that has developed organically amongst Syrian society, because these are where sustainable solutions lie. Empowering and equipping Syrians to find their own solutions and meet their own needs within the country is crucial. However, if the violence against civilians does not stop, then nothing can be done to stop people from fleeing for their lives, and it becomes yet another lost opportunity to stand by Syrians in their quest for a peaceful outcome."

For those, wishing to take action, sign our petition calling for peace in Syria.