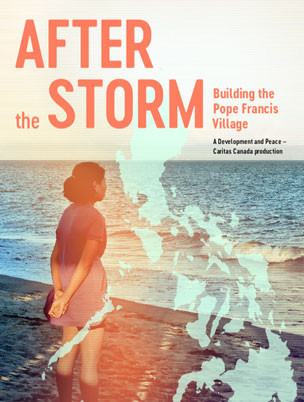 When local organizations in the Philippines supported by Development and Peace – Caritas Canada arrived in Tacloban to work alongside poor coastal communities devastated by Super Typhoon Haiyan, they were confronted by survivors who were dispossessed, living in tents, dependent on aid, and facing eviction from the land they have always known.

With the threat of eviction looming, Development and Peace and its partners felt that it was necessary to provide a permanent resettlement site near the city centre that would be community-driven and a model of innovation for responding to future disaster responses.

With its partners, Urban Poor Associates (UPA), NASSA-Caritas Philippines, the Archdiocese of Palo and the Congregation of the Holy Redeemer, Development and Peace formed a consortium to find land and manage this ambitious project that would become the Pope Francis Village.

This 47-minute documentary was filmed over three years and shows what happens when you bring the people together, when they are given a voice and a chance to be heard, and when they know how to take action.

We invite you take this inspiring journey with these 550 families by watching the film and sharing it with others.

If you prefer to watch a version with voiceovers, please click here.

To learn more about our Typhoon Haiyan reconstruction program and for resources to organize your own screening of the film, click here.

When you become a monthly donor, you help us to work with communities over the long-term, like those in Tacloban, so they can emerge stronger, more resilient and less vulnerable to future disasters.