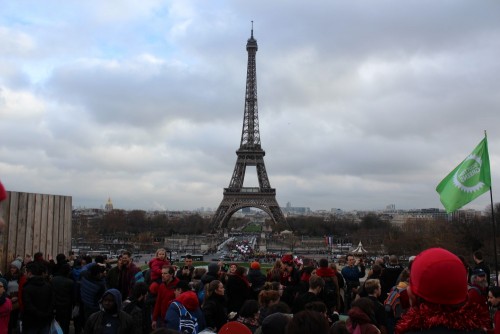 Last December, 195 countries came together in Paris and negotiated an historic agreement on climate change. The main goal of this agreement is to limit the rise of global temperatures in order to avoid catastrophic consequences such as storms of unprecedented strength, droughts and floods, and to ensure that countries already impacted by climate change have access to financial and technical resources to help them adapt to these climatic disruptions. Now that there is an agreement, what are the next steps for ensuring that countries respect it and achieve the targets that are set out within it, such as reducing greenhouse gas emissions and transitioning to renewable energies?

This is the question that will be explored in a conference being organized by Development and Peace, the Canadian Religious Conference and Equiterre that will be presented across Canada.

Development and Peace is helping to organize these conferences as part of its commitment to follow the implementation of the Paris agreement, particularly in light of the mass mobilization and engagement of its members on the issue of climate justice. In fact, as part of our Create a Climate of Change campaign, Development and Peace members distributed more than 380,000 action cards calling on the Canadian government to negotiate a fair agreement, organized several climate justice activities across the country and participated in local climate marches on November 29th, the eve of the COP21. Now, we must ensure that the government holds to its promises.

The conference will explore the actions needed to make the Paris agreement successful and limit the impacts of climate change, particularly on countries in the Global South, which have contributed the least to climate change yet are already feeling its devastating impacts. Panelists will make the link with the spiritual inspiration provided by Pope Francis in his encyclical Laudato Si’ to change our ways and show greater care of our common home, Earth.

The conference will feature guest speaker Steven Guilbeault, Co-Founder and Senior Director of the environmental organization Equiterre, as well as staff of Development and Peace. For the last year, Development and Peace has been campaigning on climate change with its Create a Climate of Change campaign and was present at the COP21 conference in Paris in December.

Read about Development and Peace at the COP21!

The conference will be held in the following cities and provinces over the next few months:

Ottawa: April 5th, Saint Paul University, 223 Main, Ottawa, Ontario K1S 1C4, 5-9 p.m. The event will begin with a screening of the documentary This Changes Everything, followed by a panel discussion.

Make sure to check out the conference when it comes to a city near you!

A first step toward implementation of the Paris agreement?
Read more