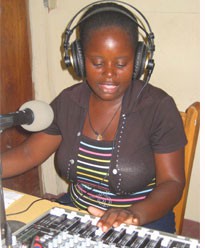 It is just a few days before Hurricane Tomas could potentially storm through Haiti and further threaten the lives of Haitians, and radio host Francy Innocent is putting together radio messages explaining to people how best to prepare for this oncoming storm.

"The messages tell people where to stay to be safe, and what to do to keep small children safe. We also have specific warnings for fishermen," explains Francy.

Francy works at Radio Zetwal (Star Radio), a fitting name for this community radio station in rural Fondwa that sits on a mountaintop – about as close to the stars as you can get. The station has its equipment crammed into a little room, not much more than five feet by five, but it is not the size of the room that counts but the reach.

"If Radio Zetwal wasn’t here, it would have a big impact, because in Fondwa and some of the surrounding areas, people only get this station. Without us they would not have any information," says Francy. "When we came back on the air [after the earthquake], we received many expressions of joy."

During the earthquake of January 12th, Radio Zetwal fell apart, but with help from SAKS (Society for Animation and Social Communication), a national association that provides support and training to community radio stations around the country, Radio Zetwal was able to get back on its feet within two months.

SAKS and REFRAKA, which stands for the Community Radio Women’s Network, are both partners of Development and Peace, and both are working hard to ensure that the voice of Haitians is heard in the reconstruction of the country.

For REFRAKA that means strengthening the ability to women to be heard and have their stories told. The network does this by providing training and workshops for women interested in radio broadcasting and by creating women-oriented content.

With support from Development and Peace, REFRAKA is producing radio reports that address the specific issues faced by women in Haiti, particularly in the post-earthquake context. They will air on the 27 member radio stations of REFRAKA, including Radio Zetwal, reaching an audience of 250,000 people across the country.

"We have adapted our content to the realities of women and are helping them understand the impact of what happened to them on January 12th. For instance, we are talking about the situation of women in the camps, and we produced a program where women pay tribute to women they knew who died in the earthquake and express their solidarity," explains Marie Guerleine Justin, training coordinator for REFRAKA.

In striving to keep people informed on decisions being made in the reconstruction process and help them understand the impact of these decisions, SAKS and REFRAKA have joined forces with AlterPresse, an alternative media source in Haiti, to create Haiti Grassroots Watch, a combination of radio, video and print investigative reports on key issues facing the country.

Haiti Grassroots Watch is tackling important questions that few mainstream media outlets have addressed and, most important, through the perspective of Haitians. Topics include the slow progress of housing plans for the 1.3 million people now living in tents and the deeper implications of popular cash-for-work programs.

This type of content can only inspire the member community radio stations of SAKS and REFRAKA to keep those debates alive with their listeners and give a voice to those who traditionally don’t have one.

"We are talking a lot about the reconstruction of the country," says Francy. "For example, we are asking a lot of questions about the rebuilding of houses. Many will only have one room, but is one room enough for a family of five or six?" he asks rhetorically. Clearly, it is a question that his listeners will soon be considering.