Violent incursions by the group Boko Haram have caused the suffering of thousands of people. Although the group originated in Northeastern Nigeria, their actions have spilled over into neighbouring Chad, Niger and Cameroon. Violence and insecurity have led to mass displacements throughout these countries, as targeted communities continually cross borders and move within their own countries to flee violence.

Boko Haram terrorizes communities by burning their crops and looting precious belonging such as livestock and agricultural tools. In addition, the instability and continuous movement of communities prevents them from planting their crops and ensuring they have enough to eat. This has led to severe food shortages in a region already greatly affected by climate change, and is adding to the suffering of those who have seen family members murdered or kidnapped and live in constant fear of attacks.

Bringing aid to victims in Cameroon

Development and Peace with support from Global Affairs Canada is providing aid to internally displaced communities, refugees and host communities in the Far North Region of Cameroon. Working with Catholic Relief Services (CRS) and local organization CODASC-Yagoua to help close to 11,500 people survive in dignity the difficult conditions they are experiencing.

1.5 million
people are food insecure in the Far North Region of Cameroon 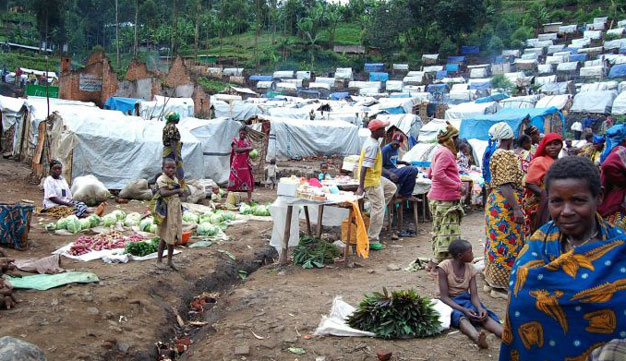 The most vulnerable households will receive cash transfers to allow them to cover the expenses of urgent needs, and cash-for-work programs have been established so that families can earn a living.

Needs regarding hygiene and clean water are particularly high, and this is being addressed with the construction of 350 latrines that include hand-washing stations and 250 bathing facilities. These are being built in consultation with communities, particularly women and girls, to identify the best locations.

Global Affairs Canada is contributing $750,000 CDN towards these life-saving activities.

Responding to the needs in Niger

Niger is one of the poorest countries in the world and is located in a region susceptible to drought. It experienced a severe hunger crisis in 2012 that it has not fully recovered from, and displacements caused by Boko Haram has placed enormous pressure on the few resources available.

Development and Peace is working with its partner CADEV (Caritas Niger) to help internally displaced communities, refugees and host communities cope with the heightened poverty they are facing. Over 18,000 people will receive support through the program being put in place. Vulnerable households will receive cash transfers to purchase food and other necessities at the local market, which will help boost the local economy, and women will be provided with financing for small income-generating activities.

247,000 people
have taken refuge in the region of Diffa in Niger

Thousands of people escaping violent incursions by Boko Haram are living in makeshift camps in Niger and Cameroon.

The wellbeing of children is a grave concern, and two recreational centres are being supported so children can participate in activities and socialize with one another.

Climate change is having severe environmental impacts on Diffa, and these are being exacerbated by the mass influx of people. As such, young adults between 19 and 35 years old are being encouraged to participate in activities to improve the cleanliness of the areas they are inhabiting, such as picking up plastic bags, and women are being provided with small stoves that burn wood at a slower rate to diminish carbon emissions.

Participation of the community is of the utmost importance in the implementation of the project and community member, including local leaders and elected officials, are consulted at all stages, including identifying those most in need of aid.

Quebec’s Ministry of International Relations and La Francophonie has contributed $50,000 towards this project.

Responding to conflict and climate change in Somalia
Read more

Thanks to Development and Peace – Caritas Canada donors, $3.8 million to be put towards relief efforts in Africa and Yemen
Read more