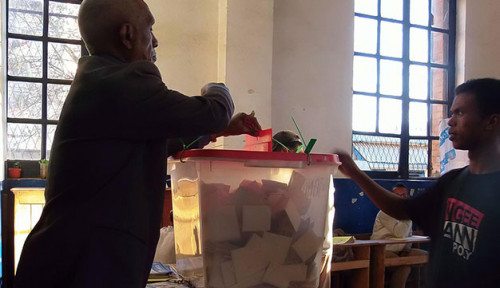 On November 7th and December 19th, the people of Madagascar will be called upon to go to the polls to elect their next President. This election is of particular importance since nearly all presidential elections held in the country since it gained independence in 1960 have led to protests and post-electoral crises. Only the elections of 1993 and 1996 took place in a relatively calm atmosphere.

This upcoming election will serve as a litmus test to see to what extent the island nation has managed to establish a peaceful rule of law, especially since the High Constitutional Court has approved 36 candidates, including former presidents Didier Ratsiraka, Marc Ravalomanana, Andry Rajoelina, as well as the current President Hery Rajaonarimampianina. “Some Malagasy say they are somewhat lukewarm about the idea of seeing these former presidents and the current head of state participating in this election. They say they want change, want to see renewal of the political class and new faces. But paradoxically the plethora of candidates also engages them, even though many do not know the new candidates.

Development and Peace – Caritas Canada is committed to supporting the Malagasy people in this democratic process by working with local organizations in carrying out civic education programs aimed at involving the Malagasy in public life and contributing to the emergence of a participative democracy. The goal is to allow people to express their choice while encouraging candidates to develop a program that is in line with the interests and needs of the population.

In recent months, various activities have been carried out, including an awareness-raising campaign on the importance of the election process and various issues, as well as collecting the expectations and priorities of voters in multiple districts regarding the actions of future elected officials. This collection was done amongst 35,550 people through home visits and the setting-up of suggestion boxes in 1,767 hamlets (villages) in 880 fokontany (commune subdivisions) grouped into 273 communes. The priorities expressed by voters have been grouped into 63 concerns, the first three being: 1) insecurity 2) construction 3) rehabilitation of road infrastructure and the eradication of corruption in all sectors and at all levels.

The objective of these awareness-raising activities is to ensure that the election runs smoothly, that the Malagasy people make an informed choice during the vote and that they accept the results. In a recent news release (French only) dated October 6, 2018, KMF-CNOE, a long-time partner of Development and Peace – Caritas Canada, issued an appeal: “We are also appealing to citizens, because they also share responsibility for the holding of an election that is without conflict and is credible. ‘Refuse to be instruments of disturbance and violence, stay alert and calm, no matter what happens.’ And above all, analyze the speeches and projects of the candidates in order to make the right choice.” This warning against the manipulation of youth by the candidates was also hammered home at World Youth Day by bishops committed to fighting corruption. Bishop Roger Victor Solo Rakotondrajao, bishop of Mahajanga, explicitly warned: “Don’t trade your vote for ephemeral gifts.

Don’t be fooled by rhetoric and false promises. It's a scam and a form of corruption.” Read more about this.

Our partners are also among Malagasy civil society organizations that are mobilizing to train and raise the awareness of election observers, especially young people, in order to set up a monitoring system by neighbourhood, district and region, before, during and after the elections. It is through the networking of our partners and other key players that all polling stations will be able to have monitors for both the first and second round of elections.

A Voice for Justice has been heard! A community in Madagascar receives royalties from a mining company
Read more

Madagascar: Living in the Shadow of a Mine
Read more

Youth are the future
Read more