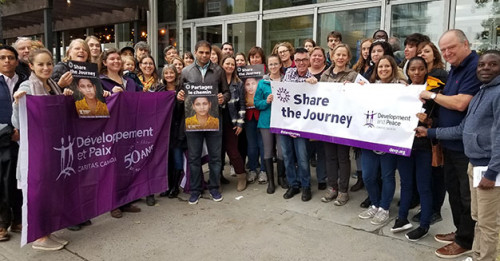 Cardinal Luis Tagle, President of Caritas Internationalis, of which Development and Peace - Caritas Canada is a member, is calling on communities, “to oppose hate and fear with actions of love, kindness and mercy, such as the ones proposed in the Share the Journey campaign.”

Development and Peace launched Share the Journey in Canada this fall. The campaign aims to raise awareness amongst Canadians on the root causes of forced migration and promote a culture of encounter. At the official launch of the campaign last year in Rome, Pope Francis said in his General Audience, “Hope is the force that drives us ‘to share the journey,’ because the journey is made jointly: by those who come to our land, and by us who go towards their heart, to understand them, to understand their culture, their language.”

Cardinal Tagle is inviting all people of good faith to collectively walk 1 million kilometres in solidarity with those forced to flee their homes. This global pilgrimage began on Sunday, October 21st in Rome in the presence of Cardinal Tagle, who walked alongside migrants and refugees.

Several pilgrimages are taking place around the world. In the United States and England, thousands of kilometres have already been travelled and there are upcoming walks in New Zealand and Chile. On the same day as the launch in Rome, walks also took place in Jordan, Somalia and Greece, and in the coming weeks, Djibouti, Sweden, Costa Rica and Honduras will be participating. Vigils will be organized in Thailand and Iran.

The staff of Development and Peace launched the Canadian solidarity walks on October 3rd. Since then, members of Development and Peace in Quebec City, Sudbury, Calgary and Saskatoon have had walks, and others will soon take place in Toronto, Edmonton and other cities across the country. If you are planning a walk in your community, please let us know by contacting the animator for your region.

Our hope is that our walks in Canada will total 40,075 km, the equivalent of the Earth’s circumference, and will raise funds in support of our programs in the Global South, which are addressing the roots causes of forced migration.

In addition to the walks, Development and Peace is inviting Canadians to send a message to Prime Minister Justin Trudeau to commit to supporting grassroots organizations in the Global South that are promoting peace, democracy and human rights, and to invest in diplomatic and peaceful solutions to armed conflict.

To learn more about our campaign, to download our guide for organizing a walk in your community or to know how many kilometres have been travelled so far, click here.

Let’s walk in solidarity with the 68.5 million children, women and men who have been forced to flee their homes! 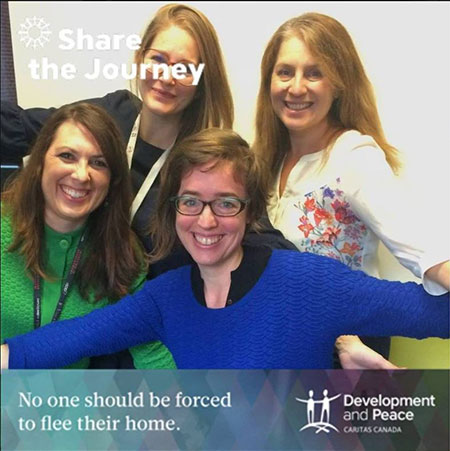 Share the Journey, one step at a time!
Read more

No one should be forced to flee their home
Read more