Building peace in Syria... from the inside

In towns and cities across the country, Canadians committed to peace and justice marked the Feast of Saint Francis of Assisi by offering hope to the people of Syria through prayers and solidarity.

This Day of Action and  Prayer for Syria was held as part of a larger national campaign for peace in Syria which we launched in February 2016, and is part of a worldwide Caritas Internationalis campaign called “Syria: Peace is Possible”.

On this day of action, Development and Peace sent a letter to Foreign Affairs Minister Stéphane Dion calling on the government to do everything possible to: 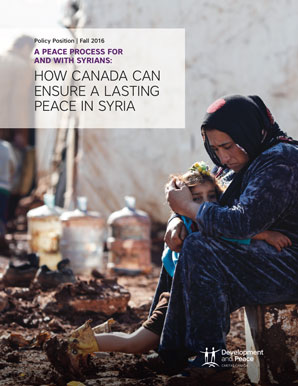 Development and Peace has been responding to the crisis in Syria since the fall of 2012. The organization is active in Syria, Jordan, Lebanon and Turkey where it has invested $24.2M in humanitarian aid and local initiatives to promote peace. Working with local partners on the ground, it has provided assistance to 600,000 Syrians.

To take action and give hope to the people of Syria you can: