Bringing Syrians together to build peace from the ground up 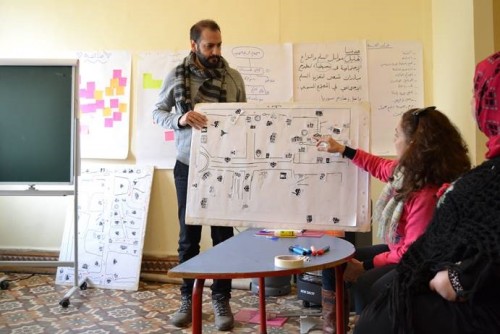 Is building peace like building a house? The new peace-building organization House of Peace believes that the answer is yes!

House of Peace, which is being supported by Development and Peace, is working on building a solid foundation for the future of Syrian society. At a time when peace for Syrians feels nearly impossible, those behind House of Peace believe that if a lasting peace is ever to happen, then efforts need to start now, not when the battlefields grow silent and people are left with deep and irreconcilable wounds.

House of Peace’s architectural plan is essentially to work with other local organizations in implementing ways to ease social tensions between groups and establish pathways towards peaceful co-existence and reconciliation.

“We are working with local organizations and communities to help them identify where there is the potential for peace and suggest actions,” says Elias Sadkni, director and one of the founders of House of Peace. Elias previously worked with Development and Peace partner Jesuit Refugee Service (JRS), helping to deliver humanitarian aid in Aleppo. Even as the war worsened and the potential for peace appeared more distant than ever, he felt that actions for peace needed to stay at the forefront of all work happening at the grassroots level.

“Tensions are now even rising between people on the same political side. This is mainly due to the new socioeconomic circumstances people are facing, and the way they have to interact with each other. Every part of a person’s identity matters now – religion, urban vs. rural, class… All these divisions are growing daily especially in the context of ongoing brutal violence, bombings, persecution, suppression and extremism in nearly all areas, including those away from battles zones. I am convinced that we need to work on social peace immediately,” says Elias, who went to do graduate studies in Conflict, Security and Development at the University of Sussex in the United Kingdom.

When he returned to the region, inspired by his studies and his experience with the neutral and compassionate approach of JRS, he drafted a model for his vision. He based it on the parts of a house, starting with the builders themselves, which are the local organizations that are acting to support Syrians, and their bricks, which are the actions they take. Then there are the different rooms of the house, which represent the various communities that make up Syrian society. The backyard is where collected information is kept, and tended by the gardeners, who are specialists from various fields who can identify how best to cultivate the fragile seeds of peace that still exist. And of course, there are international organizations like Development and Peace, which are showing support to local initiatives and are considered the neighbours.

This means not only addressing existing tensions but also looking at the underlying divisions that the various factions involved in this war preyed upon to create the violent sectarianism that exists today.

“People’s souls are fading,” says Elias. “Although the ongoing war caused major harm to the social cohesion of Syrians, we need to be courageous and admit that our history is not perfect. Before there were no open clashes between groups and we were living in peace, but we were not raised to love each other. It all came to the fore afterwards due to violence and we need to deal with that.”

Although House of Peace hopes to eventually work in Syria, it is currently operating in Lebanon, which has taken in over 1 million Syrians in a country with a population of only 4 million. It is inevitable that this will create social tensions over limited space and resources.

“It means looking at everything that local communities deal with in daily life. Something as small as people queuing for bread in the rain and providing umbrellas, can help ease tensions,” explains Elias.

The group has begun to offer workshops to other local actors and is receiving proposals for peace initiatives, but it admits that it is not easy to work within the current context. A sound and sturdy house, however, is not built overnight and they are not giving up. “Syrian people are not hopeless and we need to believe in Syrian society,” says Elias. “We are not ready to leave, we are not ready to accept that was is happening now is final.”

And if Syrians themselves, who are living through the worst of this war, are not ready to give up on their country or peace, then we as Canadians have an imperative to be good “neighbours” and fully support them in building a house where all can live in dignity and security.

Show your support for peace in Syria, by signing Development and Peace’s petition or by contributing to our Syria relief fund.

5 years of war in Syria: The voice of our partners
Read more