Breaking out of the cycle of violence in Gaza 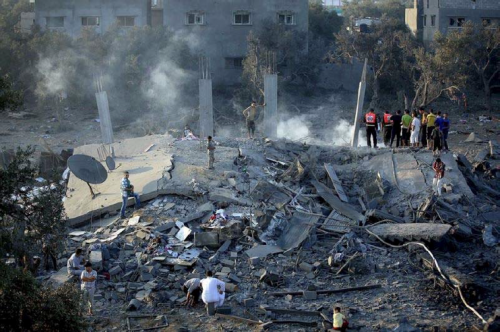 An escalation of violence in Gaza over the last few weeks has led to significant suffering for the local population. As of July 18th, the United Nations reports that 230 Gazans have been killed during the nearly two weeks of Israeli air raids on the region. There are almost 1,800 Palestinians who have been injured, of which one-quarter are children. There are 1,660 houses that have been destroyed or damaged, causing close to 10,000 people to be displaced, while in addition, half of the population does not access to water. Israeli Defense Forces report that 1,279 rockets have been launched from Gaza, causing the death of two people.

This crisis comes at a time when the population of Gaza is already fragile due to an 8-year blockade that severely restricts the movements of the population and their access to employment. The United Nations Secretary-General Ban Ki-moon, in response to this crisis, said that this situation had attained a critical point and called on both sides “to take urgent measures to end the fighting.”

On the ground, it has become nearly impossible for humanitarian aid organizations to operate in these insecure conditions, and many, including partners of Development and Peace, have had to reduce their operations. “Since the conflict started, Caritas Jerusalem has been forced to halt all activities. At this time, the medical centre is not able to operate fully due to the escalation of the bombardments and the life-threatening situation to medical staff. Despite the closure of our health facilities, Caritas Jerusalem continues to serve the people of Gaza in as many ways as possible,” reports Caritas Jerusalem, one of Development and Peace’s partners in the Palestinian Territories.

Fr. Raed Abusahlia, director of Caritas Jerusalem, said, “We acknowledge the right of Israel to live in peace and Israelis to live in security because they are living in a continuous fear, but we don’t believe that this will come by war and aggression against innocent people. The shortest way to peace and security is justice and resolution of this conflict by giving the Palestinian population their freedom in their land and by opening Gaza to the world.”

In response to this new wave of fighting, the Justice and Peace Commission of the Assembly of Catholic Ordinaries in the Holy Land put out a statement calling for a radical change in attitudes and approach by Israeli and Palestinian leaders, as well as the international community, so that peace can prevail:

“The present situation in Gaza is an illustration of the never-ending cycle of violence in the absence of a vision for an alternative future. Breaking out of the cycle of violence is the duty of all, oppressors and oppressed, victims and victimizers. In order to commit themselves to this aim, all must recognize in the other a brother or sister to be loved and cherished rather than an enemy to be hated and eliminated,” they stated. In the words of Pope Francis, who visited the Holy Land in May and invited both the leaders of Israel and Palestine to the Vatican to encourage dialogue towards peace:

“In expressing my closeness to those who suffer most from this conflict, I wish to state my heartfelt conviction that the time has come to put an end to this situation which has become increasingly unacceptable. For the good of all, there is a need to intensify efforts and initiatives aimed at creating the conditions for a stable peace based on justice, on the recognition of the rights of every individual, and on mutual security. The time has come for everyone to find the courage to be generous and creative in the service of the common good,” he said just a mere few weeks ago, when an openness towards peace seemed to emanate from both sides.

Development and Peace joins its voice with those of its sisters and brothers in Palestine and Israel, as well as all over the world, calling for an end to the violence and praying for peace, and supports all those working to stop the hostilities.