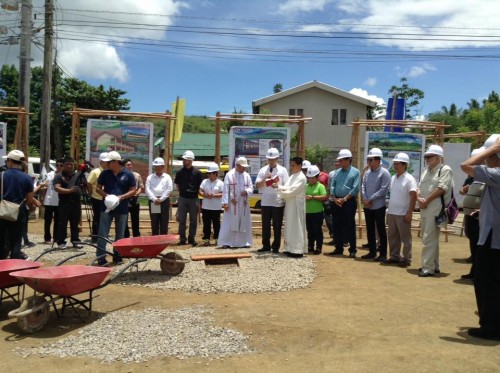 It is hard to imagine that a hilly piece of land on the outskirts of the seaside city of Tacloban in the Philippines will soon be transformed into a bustling village with a population of about 3,000 people. But this is exactly what will take place over the next few months as construction of the Pope Francis Village begins.

This village is an initiative launched by Development and Peace, along with the housing rights organization Urban Poor Associates, the Archdiocese of Palo and the Congregation of the Most Holy Redeemer, who came together to respond to the needs of several poor communities living along the coast. These communities were some of the hardest hit by Super Typhoon Haiyan in November 2013, and were facing evictions from their land for being too close to the sea.

A proposed government plan to relocate these communities was faced with strong opposition and protests as it meant taking the people far from the city and the sea, where they make their livelihoods. As such, this consortium came together to develop an alternative relocation plan that is participatory, takes into accounts the needs of the people and shows that near-city relocation is possible. Those who will be moving to this new site are involved in every step of the process, including selecting the name for their new home: the Pope Francis Village!

In August, a groundbreaking ceremony was held on the 12 hectares of land that will be transformed and give life to this new community. Hundreds of people who will be moving to the site were present at the ceremony, as well as representatives of Development and Peace. The celebrations began with an outdoor mass that was presided by Most Rev. John Du of the Archdiocese of Palo, who later sprinkled holy water on the ground to bless it.

Government officials were also present after the consortium successfully engaged several state departments in agreeing to participate in this relocation project. The Office of the President even released a message announcing this trailblazing initiative.

Geologists and land surveyors have been consulted to ensure that the hilly terrain is safe for building and land grazing is underway to prepare the site for construction. Not only will homes be built, but a chapel, community centre and commercial spaces. A large focus of the village will be on making it sustainable and eco-friendly. This is exceptionally important in a context where the people who will be resettled are victims of climate change.

Gilio Brunelli, Director of International Programs at Development and Peace, spoke at the ceremony and noted the appropriateness of selecting the Pope Francis Village as the name for what will be created on the land. He reminded those present to reflect and live by the lessons and wisdom shared by the Holy Father during his visit to the city in January and in his encyclical Laudato Si:

“We need to be humble to Mother Nature; we need to be humble to creation. We need to keep in mind that we are not the owner of this hill, water and plants. We are part of one single world, the world that God created for everybody and for every living thing,” said Brunelli to those gathered. And it is clear that Development and Peace is committed to supporting the community in showing that it is possible to live a better life through this vision.