Brazil: The Pastoral Land Commission mourns the loss of two of its leaders 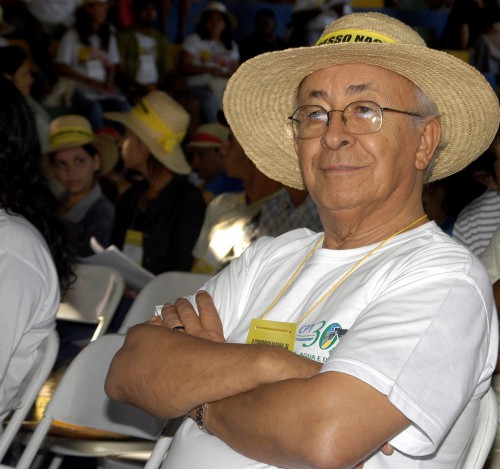 Development and Peace is deeply saddened by news of the passing of Dom Tomás Balduíno and Dom José Moreira Bastos, two leaders of its Brazilian partner organization the Pastoral Land Commission (CPT). For decades, the CPT has been denouncing violence against peasants and advocating for land reform to guarantee access to land in many ways thanks to the pioneering work of these two bishops.

Dom Tomás Balduíno, who was Bishop Emeritus of Goiás Velho and one of the founders of the CPT, died Friday night, March 4th, at 91. His death took place a mere few days after the loss of the CPT’s Vice President, Dom José Moreira Bastos, Bishop of Três Lagoas, Mato Grosso do Sul, who died on April 26th of a heart attack, aged 61.

Bishop Balduíno was known for his solidarity with Brazil’s most poor and vulnerable, and played a key role in establishing several important social movements in Brazil dedicated to defending the rights of the "poor of the Earth" and indigenous people, including the CPT and the Indigenous Missionary Council (CIMI), both linked to the Brazilian Catholic Bishops’ Conference and both partners of Development and Peace.

"Dom Tomás Balduíno has left us his example of struggle, hope, and belief in the God of the poor," the CPT stated in a release. In addition, he also closely supported the creation of the “Cost of Living Movement," as well as the "National Campaign for Agrarian Reform.”

His unrelenting commitment to work side by side with the poor grew through his own experience as a priest, and later as bishop, in the state of Pará, where he lived side by side with the reality of the indigenous and peasant communities of the region, who were facing conflicts with large commercial fishing and agricultural interests. Lured by tax incentives, these companies were establishing themselves in the region by taking over indigenous peoples’ lands, dispossessing peasants and bringing in workers from other states, who were often forced into slave labour working conditions.

“Dom Tomás struggled all his life for the defense of the landless, the indigenous, and other traditional communities, and for social justice,” the CPT said. “We feel somewhat orphaned by his loss, but we carry on knowing that Dom Tomás is, and will always be, present in the footsteps that tread this land and in the flags that flutter throughout the world in search of a more just and equal society.”

His example paved the way for others like Dom José, to follow the calling to defend the poor, which continues to be of great importance in Brazil, where disparities between the rich and the poor are some of the highest in the world. After working as accompanying bishop for Mato Grosso do Sul for the CPT, and for the CIMI, Dom Jose was appointed as vice president of the CPT in 2012, stating his wish to contribute to the affirmation of men and women peasants, in the defence of their rights.

“For Development and Pace, Dom Tomás was a historical friend and ally and a committed advocate of the poor in Brazil. For decades he was an important voice denouncing injustices and demanding structural reforms to get at the roots of inequality. He was a symbol of the Peoples’ Church in Brazil and will be sorely missed,” stated Anne Catherine Kennedy, Program Officer for Brazil at Development and Peace.

Development and Peace sends its condolences to the CPT and the CIMI, and all those in Brazil who were touched and inspired by the work of these two great leaders of the Church.