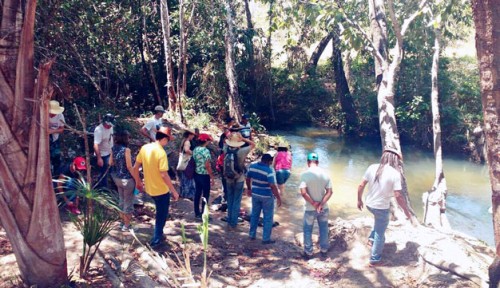 The MATOPIBA is a region deep inside Brazil on the edge of the Amazon that is lush in biodiversity and where many peasants make their living cultivating small plots of land to feed their families and communities. Called MaToPiBa because it is made up of parts of the states of Maranhão, Tocantins, Piauí and Bahia, the region has become notorious for violent landgrabs, where entire peasant communities are being brutally expropriated by ‘grilheiros,’ who cut down the natural vegetation and falsify land titles to re-sell the land to agribusiness.

The land is being used for the cultivation of soy, sugar, corn, cotton, eucalyptus and meat, which are all high-profit commodities mainly destined for export. The high return on investment has gained the attention of international financial firms who find ways to invest in these agribusinesses despite the associated human rights violations. And many pension funds, including funds from Quebec and British Colombia where many Canadians have pensions, have invested in these speculative agricultural acquisition funds.

Development and Peace partners Rede Social de Justiça e Direitos and the Pastoral Land Commission (CPT) of Piauí joined a delegation that consisted of 30 human rights, development and rural experts on a fact-finding mission from September 6-10 to investigate human rights violations and environmental destruction being caused by these profit-driven land grabs. The mission, which was organized by FIAN International, visited impacted communities to document and analyze the structural impacts of land grabbing from a human rights perspective. Participants also examined the obligations of the government of Brazil, and identified concrete extraterritorial human rights obligations of the states where these transnational companies are based.

Participants witnessed how villagers are suffering from diminishing water resources as a result of deforestation and high levels of agrochemical pollution which is causing serious health issues. In the south of Piauí, the team found clear indications that environmental degradation is putting the right to food, water and health of communities at great risk.

Mr. Juarez, leader of the Melancias community, told the observers that pesticides used on the plantations flow directly into the river during the rainy season. This makes it impossible for them to use the water, since doing so leads to a wide range of health problems, including nausea, vertigo and skin irritation.

A villager holding two bottles, including one with polluted water.
Photo by: Rosilene Miliotti /FASE

The presence of large-scale farmers, land grabbers, scouts and militias can be felt throughout the region. Community members are constantly being intimidated and forced to leave their land, with some selling it a very low price. Many families end up moving to favelas in urban centres, trying to survive in precarious or illegal jobs. Those that manage to remain in the region, if they are not violently evicted again, work in very risky slave-like conditions on agribusiness farms that occupy their former traditional lands. The delegation came across the case of the community of Sete Lagoas, which recently reported 10 cases of intimidation by the company Dahma, which provides ‘security’ for the grilheiros. Despite a court order ruling in favour of the villagers, the threats continue.

The delegation ascertained a clear absence of the presence of the state of Brazil in these remote communities, where the state is failing to protect the land and territorial rights of peasants to apply public policies in the communities. A preliminary report of the fact-finding mission with recommendations will be shared with Brazilian authorities, followed by a final report by the end of 2017.

There is also the larger question of the responsibility of the home countries of financial actors that are funding these agribusinesses. Although international financial firms partake in a complex web of deals to invest in Brazilian agribusinesses, pension funds based in the US, Canada, Sweden, the Netherlands and Germany have been traced to landgrabs in MATOPIBA.

Here in Canada, the Caisse de dépôt et placement du Québec (CDPQ) and the British Columbia Investment Management Corporation (bcIMC) are both potentially involved in land speculation in Brazil through their investments in the global farmland acquisition fund called TIAA-CREF Global Agriculture LLC (TCGA). Development and Peace has joined a global campaign calling for transparency and ethical investments to ensure that our pension funds are not displacing people and destroying the environment.

In order to advise the CDPQ of the impacts of their investment in TIAA-CREF, a delegation from Development and Peace, Inter Pares, and the Pastoral Land Commission met with the CDPQ’s Senior Vice-President who is responsible for Compliance & Responsible Investment, Mme. Ginette Depelteau, in Montreal. In an honest and frank dialogue, the delegation discussed how foreign pension fund investments can cause violence and displacement. Jean Bellini, a Sister of St. Joseph who works with the CPT, exposed the political and economic situation in Brazil which allows land owners to displace traditional communities and Indigenous peoples, and made mention of the high number of murders committed with impunity of peasants and Indigenous peoples who defend their right to land.

Serge Langlois, Executive Director of Development and Peace, was satisfied with the dialogue that was launched at the meeting. He said:

"The CPDQ representatives listened with great interest to the research and experience that we shared with them. We look forward to hearing back from them about any investigations they conduct to ensure that their investments are not only legal but also ethical.”

The question of land, environmental and human rights violations in Brazil and how these are being driven by foreign investments was also discussed at a conference at Bishop’s University in Lennoxville, Quebec that featured speakers from the CPT and another Development and Peace partner in Brazil, the Landless Peasant Movement (MST).

To learn more about the connection between landgrabs in Brazil and Canadian pension funds, watch this video:

To learn how you can join this campaign for ethical pension funds, visit the article:

Do you know where your pension fund money is being invested?