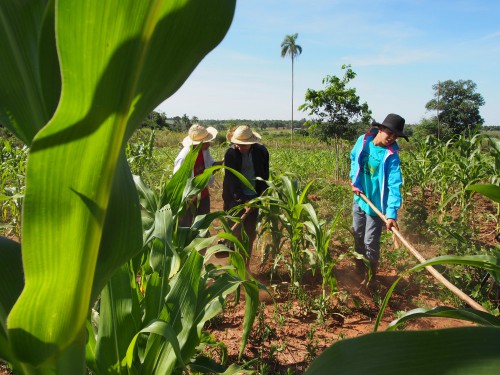 The International Day of Peasant Struggles was established in 1996 by the international peasant movement La Via Campesina to commemorate the April 17th massacre of 19 landless Brazilian peasants. It is a day that provides an opportunity to celebrate the solidarity and resistance of peasant movementsworldwide ,and to strengthen alliances between people in rural and urban settings so as to create a society founded on dignity and social justice for all.

On this day of action, Development and Peace wishes to underline the struggles carried out by peasant movements all over the world, who must organize to counter the threats to their way of life.

In Colombia, the lands of peasant and indigenous families in the Chocó region are being violently appropriated by agribusinesses, which use it to cultivate palm oil, bananas and other monocultures. Our partner, the Inter-Church Commission for Justice and Peace (CIJP) is supporting affected communities in their demands for the restitution of their lands.

In Cambodia, our partner, the Cambodian League for the Promotion and Defense of Human Rights (LICADHO), estimates that the number of people driven from their communities due to land conflicts more than tripled between 2013 and 2014.

In Paraguay, the Paraguayan Peasant Movement (MCP) supports landless people and small family farmers who want to protect their access to land. Founded in 1980, the MCP is one of the main peasant resistance groups in Paraguay.

In Colombia, a nationwide farmers strike took place in 2013 to block the adoption of Resolution 970, which would have made it illegal for peasants to save their seeds. Thanks to this widespread mobilization, there is now a moratorium on the legislation.

In Sierra Leone, peasants are mobilizing in order to ensure that agricultural knowledge is passed on and that young people also learn how to select and save seeds.

In Canada, Bill C-18, also known as the Agricultural Growth Act, was adopted in February 2015, despite protests by Canadian farmer associations due to the limits it places on access to seed diversity.

Development and Peace’s campaigns on threats to seeds and biodiversity in the fall of 2014, and on small-scale farming in the fall of 2011, highlighted the importance of these issues, and showed the need to be insolidarity with our brothers and sisters in the Global South in their struggles. This year, on April 17th, why not show support for peasant struggles by sharing a meal cooked with locally-grown organic products? Enjoy!

The threat to seeds is a global concern
Read more