Coming over the mountains into the isolated department of Grand’Anse in the southwestern part of Haiti, shocking scenes of desolation and devastation take over the landscape. These scenes can only be described as apocalyptic. It looks as if an out-of-control wildfire ravaged the area rather than a hurricane. Flattened banana and coconut trees sit in swamps of stagnant water. Those that managed to resist the 250 km/hr winds have brown desiccated leaves that hang listlessly, struggling to regain a breath of life. The sky is hazy as clouds of smoke rise from the ground as people burn debris or turn fallen trees into charcoal.

The department of Grand’Anse is a mountainous and remote region that only recently had a proper road completed to connect it to the capital Port-au-Prince. It was one of the few parts of Haiti that still had forests, and its fertile soil produces quality cocoa, coffee and other crops in abundance. 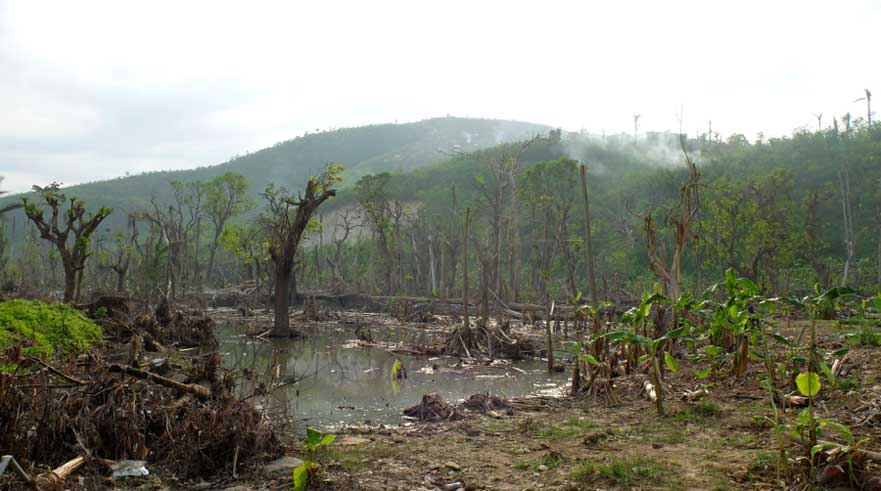 The department of Grand’Anse resembles a wasteland even three weeks after Hurricane Matthew.

Although it is a region vulnerable to tropical storms, Hurricane Matthew was unprecedented and the region has been laid to waste. The narrow streets of the main city of Jeremie remain covered in debris, and fetid water sits in pools among the dense houses, the threat of cholera never far from the minds of the people.

Caritas Jeremie, the diocesan chapter of Caritas Haiti, sits deep in the woods of Grand’Anse, in the village of Leon. A bumpy and muddy road takes you to their modest offices surrounded by destroyed gardens and forest. The previous bishop at the time, Most Rev. Willy Romelus, chose to place the Caritas office in this small outpost rather than the city, because he felt that Caritas needed to be close to the people it serves.

This has been critical in Caritas’ response to Hurricane Matthew, which has focused on remote areas since most other distributions are taking place in urban centres. Those who live deep in the woods have received virtually no aid, or even been contacted by government officials.

As Marie-Raymonde Mesnel, a Caritas employees who works with women in the region, explained, “Some women live in such remote parts of the mountains that the government doesn’t even know they exist.” There has been little government presence since the hurricane, and when a group of people are asked if they have been visited by authorities, they scoff at the suggestion despite the fact that they have all lost their roofs and their crops.

With elections forecast for November 20th, the interim government of Haiti has refused to call a state of emergency, which has severely limited international aid and has given a low profile to the actual severity of the situation.

"In two to three months, it will be a famine," says Father St. Alphonse, director of Caritas Jeremie. "This is the planting season but people have lost their existing crops and have no seeds to plant," he explains.

So far, Caritas has distributed food and hygiene kits, which is providing essential aid, but he knows it is but a drop in the water. ‘’People have no roofs and it keeps raining constantly. They are vulnerable to diseases and can’t sleep.’’

Caritas Jeremie, with support from Development and Peace-Caritas Canada, has done distributions in the riverside village of Leon. 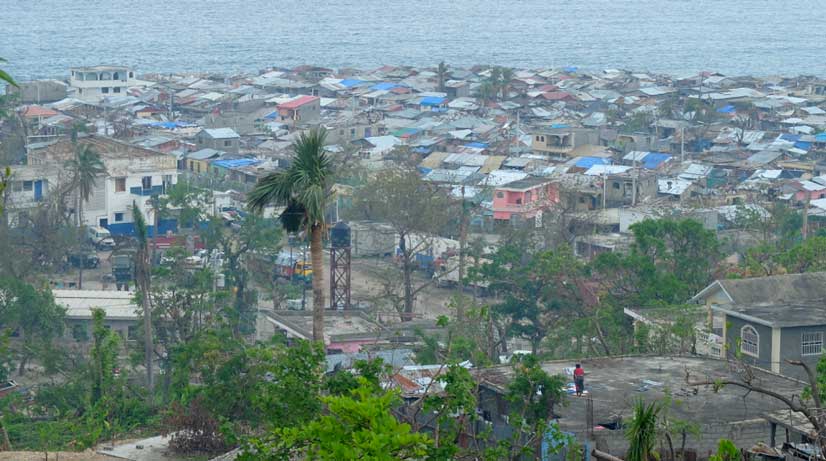 The sky in Jeremie is filled with haze as people burn debris or are collecting fallen trees to make charcoal as a source of income.

Nerlande Clairveau’s family of five has managed to make its food kit of pasta, oil, peas, rice and maize last 22 days, but soon they will run out. ‘’We have lost all our crops, including peanuts, which are a cash crop for us.’’ The family currently has no income, and as a consequence, can’t afford to purchase tin sheets to repair their roof. ‘’We haven’t started the clean up of our fields. It will probably take two months,’’ she says.

Her elderly mother points to the kitchen, which has completely collapsed. ‘’We are grateful to Caritas because there has been no other help. We hope that they can provide more aid,’’ says Nerlande.

Of course, more aid will depend on the solidarity of people to give, which will allow Development and Peace and its partners like Caritas Jeremie to address the long-term needs of the population as they rebuild their lives. 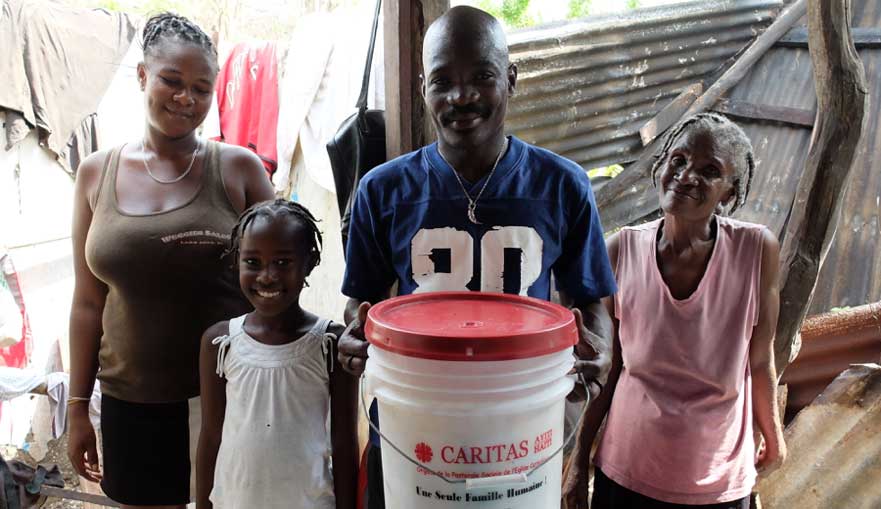 Please support Development and Peace in restoring the dignity of those who have lost everything to Hurricane Matthew.

Your donation can make a difference