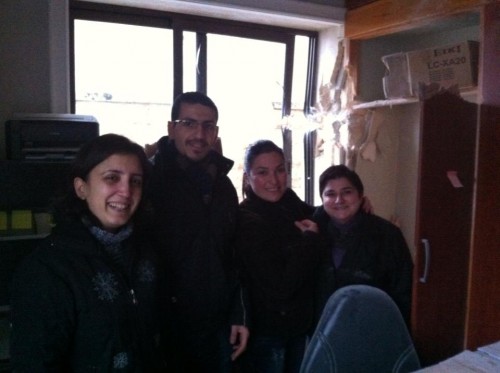 The need for peace in Syria hit very close to home on Wednesday, when a Caritas Syria centre in Aleppo received a direct hit from a rocket at 4 p.m. Miraculously, the centre was empty and no one was injured in the attack. The centre’s office, however, sustained significant damage.

Located within the Chaldean diocesan compound, the centre, which is run by the Aleppo diocesan branch of Caritas Syria, provides food, rent assistance and clothing to poor Syrian families affected by the three-year conflict in the country. Had the attack occurred an hour later, the waiting room at the centre would have been full.

Parish priest and Caritas Aleppo board member Fr. Toni Ghazzi, who said it was a miracle that nobody was hurt. He was on his way to open the centre, accompanied by a group of children, when the attack happened. Seeing the rocket, the group threw themselves to the ground. In its trajectory, the explosive skidded in front of them, and then ricocheted into the Caritas centre, destroying the Office for Rent Assistance. It ended up in the Caritas waiting room, but fortunately failed to explode.

The four-person Rent Assistance Team should have been working in the office at the time, but their arrival had been delayed. “We are only alive thanks to God and the protection of St. Joseph, patron of the Church,” said Mony Tayyar, the team leader.

The attack comes on the heels of the Geneva II peace conference on the crisis in Syria, where international leaders are meeting to attempt to negotiate a peaceful solution to the crisis occurring.

“We pray to God that He guides government officials and all responsible for the conflict in our beloved Syria to find a just solution and restore peace in the region,” said the Caritas Aleppo team in a message.

Development and Peace, which is supporting Caritas Syria and other organizations to bring aid to Syrians affected by the crisis in their country, last week urged the Government of Canada to promote a just and negotiated political solution to the war in Syria, and greater support for humanitarian aid.

5 years of war in Syria: The voice of our partners
Read more