Agriculture must be a priority in the reconstruction of Haiti 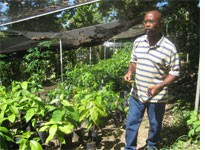 When Port-au-Prince was struck by a massive earthquake a year go, images of crumbled buildings filled television screens and newspapers. At the same time, however, hidden away in the mountains of Haiti an untold story was unfolding. An estimated 700,000 people fled the capital to take refuge with friends and family in rural parts of the country, where most people live off of subsistence farming.

The impact of this migration is complex and its multiple consequences on the country have exposed the urgent need to rehabilitate Haiti’s agricultural capacity if the country is to have a better future.

For one, it has created an added strain on already crowded households. It didn’t take long for these households to go through their food reserves, including seeds set aside for the next crops.

In a country where malnutrition and hunger were already problematic prior to the earthquake, this loss of crops has only heightened food insecurity and left many susceptible. Adding to this vulnerability, is the fact that for many families, this migration has also meant the loss of income from family members who worked in Port-au-Prince, often destined to pay school fees for children.

The tragedy is that at one time Haiti produced enough food to feed itself, but with policies that lowered tariffs, imported foods began to gain on local produce, pushing peasants further into poverty and driving people into the city.

If priority is given to local production, then Haiti, once rich in fertile land, has the potential to regain its former agricultural capacity. With proper investment and guidance, erosion and deforestation can be reversed, soils can regain their rich mineral content, and farmers can improve their crops.

This could help generate enough organically-grown local food, which is healthier, to feed the country and for exportation. This will also provide income for peasants to improve their living conditions and send their children to school. It could also give the opportunity to those who have left overcrowded Port-au-Prince to restart their lives on the land they once knew.

Development and Peace has made food security, with the aim towards food sovereignty, one of its tops priorities in Haiti. It has committed over $5 million to support several peasant and agricultural organizations in their efforts to defend the rights and improve the livelihoods of the country’s large peasant population, and help the country become stronger as it rebuilds itself.

These partners include the following:

Mouvement Paysan Papaye (MPP): This large peasant organization is a long-time partner of Development and Peace and has 60,000 members. After the earthquake, Development and Peace helped MPP, which is based in Hinche, to distribute local seeds to 20,500 families to the benefit of 102,000 people. Development and Peace is also in the process of helping the MPP set up a larger-scale project to re-launch and reinforce agricultural practices in the Plateau Central.

OFTAG: This dynamic association of women peasants in the region of Grand’Anse is striving to improve the difficult conditions of women in the area. Nearly all of its 2,500 members took in displaced people after the earthquake. Development and Peace is supporting the work of OFTAG in three communities in the region. Women will benefit from workshops, seed and tool banks, mills and as a pilot project, one community will build a chicken coop as a way of increasing income.

OJUCAH: Development and Peace supported this organization with a seed and tool distribution program for 500 families in the region of Lavial.

Caritas Port-au-Prince: This diocesan branch of Caritas Haiti is helping communities in the mountainous outskirts of Port-au-Prince recover from the earthquake. Development and Peace is supporting a $3.5 million integrated project that will be carried out over three years and will improve the food security of eight communities. The project includes seed, tool and livestock banks, agricultural and veterinary training, and support in the commercialization of produce.

UPAH: This national beekeeping association received support from Development and Peace to help farmers in the community of Malanga re-launch their agricultural production using better techniques, such as for fertilizing and composting.